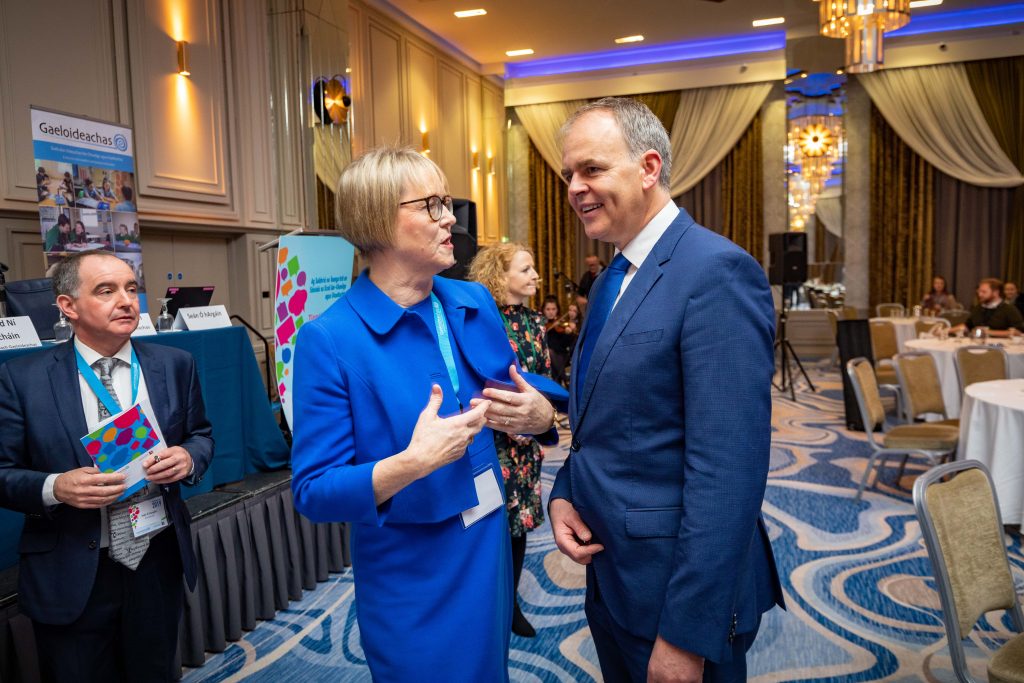 Gaeloideachas is delighted by the Minister for Education and Skills Joe McHugh’s announcement that two of the four new primary schools due to open in 2020 are certain to be Irish-medium schools, as there is no Irish-medium education available within the school planning areas of Donabate and Saggart. This follows a review of the process to establish new schools after an application for a gaelscoil in north Dublin was refused in 2016, despite having the support of parents of more than 700 children.

“Thanks to the determination of those parents, the support of their patron, An Foras Pátrúnachta, continuous lobbying by Gaeloideachas and Conradh na Gaeilge and an investigation by the Irish Language Commissioner, we now have a reform of the unfair process that had inhibited the growth of Irish-medium education since 2011” said Bláthnaid ní Ghréachain, Gaeloideachas CEO. The Irish Language Commissioner’s investigation also resulted in the Department’s sanction for Gaelscoil Áine, a multidenominational school which opened in 2019 to serve the Marino, Drumcondra and Dublin 1 areas.

“We recognise that the democratic process used by the Department to decide on the types of new schools opened was designed with the best of intentions, but it favoured the majority who chose English-medium schools at the expense of parents who have a preference for Irish-medium education. These parents were then compelled to enrol their children in English-medium schools, having no other option within a reasonable travel distance. In communities where every single school teaches through English, providing for equality means positively discriminating in favour of a disenfranchised minority, in this case, parents who do not have access to Irish-medium education for their children.”

Much of the focus in the debate on the patronage of new schools has focused on the need to provide for multidenominational education at primary level. Gaeloideachas maintains, however, that this does not need to be at the expense of Irish-medium education. Since the patronage determination process was commenced in 2011, all bar one of the ten Irish-medium primary schools opened have been multidenominational schools, providing for children from all religious, cultural, linguistic and socio-economic backgrounds, and of all levels of ability. Irish-medium schools routinely cater for all forms of diversity, and offer every child and their family a supportive and welcoming environment.

Consultations with parents will take place in all four areas where new schools are to open in 2020 to determine who their patrons will be. It’s possible that the new schools to serve the Carragaline and Sallynoggin/Killiney/DLR/Cherrywood catchment areas may also be Irish-medium schools if parents vote for them to be. It’s not yet known which patrons will be in the running for the new schools, but all information will be made available on the Department of Education and Skills dedicated website, www.patronage.education.gov.ie, once the consultation process opens.

“The announcement that two of the schools are to be Irish-medium schools will force patrons to assess their commitment to promoting children’s rights and to the Irish language. It’s very important that parents engage with the process, inform themselves of what the different patrons have to offer and make sure their votes are counted” said ní Ghréachain.

Gaeloideachas supports Irish-medium education providers from naíonra to primary to post-primary level, across a range of patronages. “Our vision is that high-quality Irish-medium immersion education should be available to every parent and guardian who would choose it for their child” said ní Ghréacháin “and the Minister’s announcement brings us one step closer to making that a reality for these communities”.